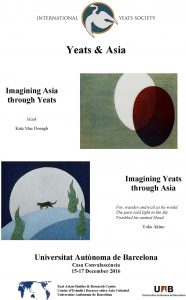 At the inaugural Conference of the International Yeats Society, A Writer Young and Old: Yeats at 150, held at the University of Limerick from 15–18 October 2015 and organised by the School of Culture and Communication, it was decided to organise a symposium on the subject of Yeats and Asia in Barcelona the following year.

On behalf of the International Yeats Society, the East Asian Studies & Research Centre of the Universitat Autònoma de Barcelona organised Yeats & Asia: Imagining Asia through Yeats, Imagining Yeats through Asia from 15–17 December 2016 at the Casa de Convalescència in Barcelona.

Niall Henry premiered the documentary Things upon the Stone dedicated to the Blue Raincoat Theatre Company’s production of Yeats’ play The Cat and the Moon, commissioned by the East Asian Studies & Research Centre, together with Bettina Seitz and Peter Martin.

Artwork was provided by Kate MacDonagh (Mask) and Yoko Akino (The Cat and the Moon).

Irene Masdeu, Eamon Butterfield and Silvia Vásquez were invaluable for the organisation of the symposium.